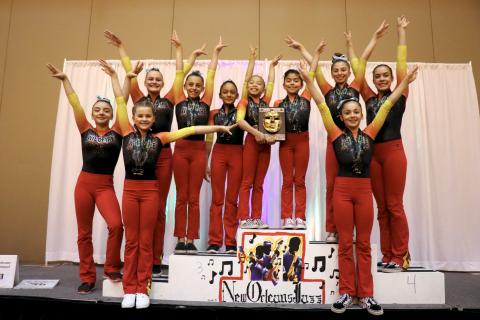 Wildfire Gymnastics continued its 2018 competitive optional level season in Louisiana at the New Orleans Jazz Invitational. Held during Super Bowl weekend and right in the middle of the ongoing Mardi Gras celebrations, all together, it was quite the encompassing event. Wildfire, listed a roster here naming 26 gymnasts in total and 19 of them competed All Around. What emerged was 16 top three AA finishes from which came 9 All Around Championships. These wins included victories, at every level entered, these being 7, 8, 9 and 10. Complementing this effort was what came about as two time 2018 New Orleans Jazz Invitational 1st Place Team Championships, representing Levels 7 and 10.

Wildfire entered two Level 8 athletes, one of them winning All Around Gold the other AA Silver. Brianna Nguyen progressed as AA champion, she compiling 2nd place finishes on three events (Bars, Beam and Floor). Scoring the second highest Level 8 Beam total of the competition, including all age groups, Kaitlyn Tran won the event in her age group with a 9.775. She finished her meet as an All Around Silver Medalist posting a 37.700, also the second highest AA score of the Level 8 competition, including all age groups.

Thirty-two athletes competed, representing their teams as Level 9’s. Wildfire’s Avery Byun finished out as the lead scoring athlete, she ranking 1st among them. Winning the event in her age group, Avery also posted the second highest Bar score of that group of thirty-two. Notable wins also include those by meet event specialists, Thu Nguyen (1st Beam - 9.625, Floor - 9.600) and Jayden Ruth on Floor.

Competing together inside the same 10B age group, Emily Lopez and Sydney Gonzales ranked, respectively, as the top two Level 10 athletes of the competition, spanning every age division. All Around champion, Emily Lopez secured a solid AA total for the day (38.250 - a 9.55 event average). Adding to that win was another, for Beam, a Gold Medal performance earning her a 9.600. All Around Silver Medalist, Sydney Gonzales (38.175), finished her AA competition behind Emily by just a .75 margin. During the course of that effort, Sydney earned for herself Championship honors on Vault posting a 9.775, the Level 10 meet high for Vault. Nicoletta Koulos, the 2018 New Orleans Jazz Invite 10C age division’s All Around Champion, prompted two more Gold Medal performances bringing about wins on Vault (9.750) and Floor (9.800!!). Nicoletta’s Floor Score was the highest of the Level 10 competition as a whole. Standout individual event Gold Medal highlights include All Around Bonze Medalist Alyssa Vulaj on Floor (9.650), 10B Division’s Jordyn Duffield on Floor (9.600), 10C Division’s Sanya Glauber Bars (9.525) and the 10B Division’s Bar Champion, Giana Kalefe (9.650!). Giana’s score was the highest Level 10 Bar total of the weekend. At the finish of competition, Wildfire did so after producing a 9.600 individual event team average, emerge as the 2018 New Orleans Jazz Invitational Level 10 Team Champions!