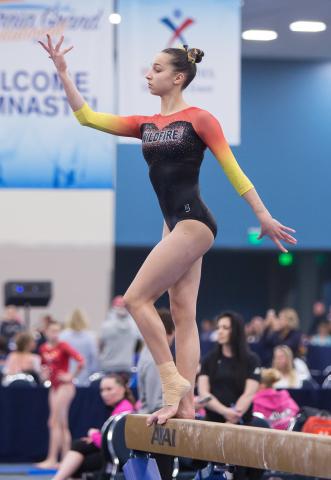 Wildfire Gymnastics began its 2018 competitive optional season at the California Grand Invitational on January 11th, the meet site being the Anaheim Convention Center. Coming from across the United States and Canada were some 60 teams bringing with them 1643 gymnasts competing for honors. And perhaps too, include a trip to nearby Disneyland as well. By competition’s end however, Wildfire finished with at least one All Around Champion at every level entered, these being 7, 8, 9 and 10. Complementing this effort was what came about as Team Championship wins for Levels 10 and 7 and one as First Runner Up for Level 9.

As part of the 160 Level 9 gymnasts participating at the 2018 California Grand Invitational, 2017 Level 8 Regional AA Champion, Avery Byun, did so by the end, finish 8th among them all. Winning All Around Gold in her session, Avery added to that, a win on Floor as well, posting a 9.700! Avery’s Floor score was the highest of the 160 Level 9’s competing. Earning All Around Silver behind Avery was Bars Champion Jordyn Warner. And Bronze Medal AA finisher, Audrey Easter in turn ends up winning Beam by result of her well earned 9.600.

The complete list of Level 8’s competing in Anaheim numbered 223 gymnasts. Among that group were two Wildfire athletes who tasked to compete All Around. These outstanding performers included 2017 Level 7 Region 1 Team All Around Silver Medalist Thu Nguyen, and Bri Nguyen, the 2018 National Judges Cup Junior AA Champion. Thu finished out her experience at the California Grand as a Senior Champion (38.300). She won all four events, with highlights reflecting 9.700’s on both Vault and Floor. Thu’s fall on Beam still earning a 9.350 was a standout event. Her Vault score was the highest among the 223 Level 8’s competing. Bri ended placing 2nd AA as a Junior, she winning Beam and taking 2nd on Bars.

Ranking 8th overall against 238 level 7 gymnasts spanning every age group and 1st among Juniors, was 2017 Level 5 State AA Champion, Thi Nguyen. Her first meet as a 7 proved well as Thi’s All Around victory was enhance by a three event win including Vault (9.400), Bars (9.800!) and Beam (9.600). Thi’s AA total was 38.225. Also a 2017 Level 5 State All Around Gold Medalist was teammate Dayenu Munoz, ranking here, 2nd AA among Seniors. Directly following Dayenu and in turn placing 3rd AA, was Senior Alyssa Morales.